Woman Mathematician
to Provide Leadership
Reports Vinod Varshney
First time a woman mathematician Prof. Ingrid Daubechies would provide leadership to international cooperation in mathematics. She has been elected the president of the International Mathematical Union, an august body of mathematicians established nine decades ago.
The IMU elected Tuesday its Executive Committee also for the term 2011–14. It has one Indian also Vasudevan Srinivas.
Prof. Daubechies’ election is doubly encouraging as the first International Conference of Women Mathematicians was inaugurated in Hyderabad on 17 August. Besides, she is the first woman Professor of Mathematics at Princeton University, New Jersey. She is also the first woman to receive the National Academy of Sciences Medal in Mathematics (2000).

Prof. Daubechies is a mathematician and a physicist and works in the Department of Mathematics and in the Program in Applied and Computational Mathematics at Princeton University. Born in Belgium in 1954, she is now settled in the US (1987 onwards) after her marriage.


In her election speech, Prof. Daubechies expressed happiness that pure and applied mathematicians were interacting more with each other. “I am very interested in how emerging countries develop mathematics…There is enormous potential in young people...In a sense, mathematics is easier for an emerging country to develop than physics or chemistry because you do not need to have a big layout in materials and labs and so on and lot more money. In mathematics, once you build a nucleus who can work together, then the sky is the limit!”


Next Congress would be in Korea


The next International Congress of Mathematicians will be hosted by Korea. The decision was taken by voting at the 16th General Assembly meeting held in Bangalore. Hyungju Park, a member of the Korean delegation in his presentation at the General Assembly told, ‘In IMO (International Mathematical Olympiad), Korea is now steadily ranking third or fourth... mathematics is becoming a very popular subject in Korea. When kids enter college, they take a college entrance exam and they choose their majors. The second most popular area in major universities right now is mathematics. This is something we didn’t expect before. So definitely math is becoming a very popular subject and we think that our ICM efforts also contributed to that. We are telling young students that math is a fascinating subject and there are things that are happening.’


“The relation between the math community and industry is also becoming very strong. Many young students are getting interested in mathematics especially due to TV coverage. Seventy percent of IMO medalists in Korea are choosing math as their college majors – most of them will go on to get Ph Ds in mathematics.”
Posted by VINOD VARSHNEY at Wednesday, August 18, 2010 2 comments: 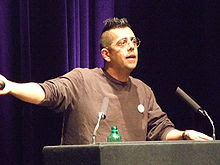 Simon Lehna Singh, physicist-turned British author of Indian origin has been chosen for the first Leelavati Award that has been instituted for outstanding contribution to public outreach in mathematics by an individual.


This international award had been instituted on the name of the 12th century Sanskrit book “Leelavati” dealing with arithmetic and algebra.


In medieval India mathematics used to be popularized and taught in verse. The superb example is the treatise “Leelavati”. The book posed problems in verse and also gave hints for solutions.


Leelavati, a Daughter of India


Leelavati is told to be the daughter of 12th century mathematician Bhaskaracharya who wanted to teach mathematics to his daughter. He did so by composing this treatise


One can imagine how lucid it would have been teaching and learning of mathematics during that time though the education was allowed to the select few. Compare it with how mathematics is taught in a boring fashion today by incompetent teachers in India.


One may ask what Simon Lehna Singh has done to deserve this ten lakh rupees prize? He actually tried using latest media TV and Film to do a little bit exactly the same what Bhaskaracharya had done eight hundred years ago—popularize mathematics by Leelavati.


Why No Indian Living in India Becomes a Simon
Question however in India will crop up why any Simon Lehna Singh could not grow up here. Obviously the current money-minting culture of media is to blame for this. It does not care to create opportunities of such kind of serious work.

Simon, whose parents emigrated from Punjab to Britain in 1950, like millions thronging UK now, in 1990 joined BBC’s ‘Science and Features’ department. And it made all the difference. In 1996 he directed a documentary Fermat’s Last Theorem.

This was after the acclaimed solution, by the British mathematician Andrew Wiles in 1995, of one of the world’s most challenging problems in mathematics – the proof of the famous conjecture made by the French mathematician Pierre de Fermat in 1637.

The documentary exploration of the celebrated problem also formed the subject for Singh’s first book, Fermat’s Last Theorem (1997). This was perhaps the first-ever popular book on mathematics to become a best-seller.

Many Indians, including IT geeks who create new softwares in thousands of companies world over, do not know what Leelavati is.

This work of Bhaskaracharya was also translated into Persian and was influenced mathematicians in West Asia.

The Leelavati award will be given away at the upcoming 2010 International Congress of Mathematicians to be held at Hyderabad, India, during 19–27 August.